For professional development this year Brandon signed up for a Nature STEM PD where he went to different outdoor locations to learn about them and how teachers can implement getting students into nature more. For his most recent one over fall break they went up Rock Canyon.

Brandon has a lot of experience from being a TA for one of his geology professors at BYU in taking classes on geology tours up the canyon. So he was able to lead the group and teach them about the geology and tectonic history of Rock Canyon.

Afterwards one of the 5th grade teachers from Edgemont elementary was very excited about this since she had been teaching her class all about geology and everything they learned about on their little hike. So she immediately wanted to find a way to take her class up the canyon and asked if Brandon would be willing to lead them? Brandon was able to switch some things around and make time to do that for them last Friday. But, instead of just her class, it was the entire 5th grade class from Edgemont…over 80 kids!

They then split the classes into 4 groups and they had 4 stations around the canyon that the students rotated around and Brandon was one of the stations. He was teaching them about the oldest rock there called mineral fork tillite, which was deposited there by a glacier some 900 million years ago. On top of that layer is the tintic quartzite. This is metamorphic sandstone which indicates that a beach environment existed some time after the glaciers. Finally on top of that there is limestone which indicates a warm shallow sea. So sea levels rose over the sandy beach depositing the limestone.

After all the stations he met them all back down at the amphitheater to give his final thoughts about the tectonic forces that shaped the canyon and the history of earthquakes in Utah. They also had a short Q and A with them for the last 10 minutes. When all was said and done the kids hiked back down to their classrooms with a great learning and memories and a great experience in nature about something right in our very own backyard! 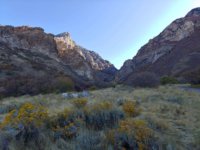 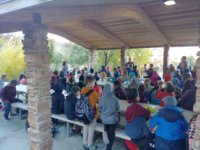 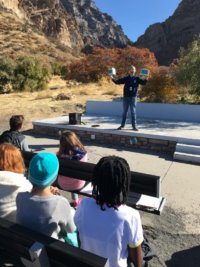 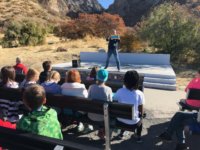 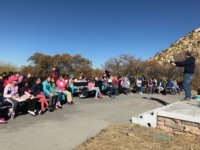 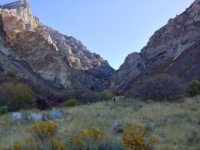