During Grant’s  math class students at Independence High School were challenged to solve a real world problem.  The cooking class wanted to smoke 6 lbs of Salmon Fillets that they received as a donation.  The problem: Six pounds of weight might cause the rack to bend and spill the food into the ashes of their BBQ smoker.  That would be a waste.  Their task was to build a support structure using common kitchen items that would hold the rack up and still allow the smoke to circulate freely over the fillets.

First they visualized and decided that bread pans turned upside down on the lower grill would be a good start towards supporting the upper rack.  Then they measured and calculated how much taller the structure needed to be.  The math said they needed something that was 2.75 inches tall to place on top of the bread pans.  It turned out that a cake pan rim had just the right height.  Once the support structure was built under the rack, the salmon was loaded and cured in the converted BBQ smoker. Damian Beltran is shown solving the problem on the board and then he points to the solution in its real world application.  Damian later served smoked salmon to his fellow peers afterschool in cooking class. 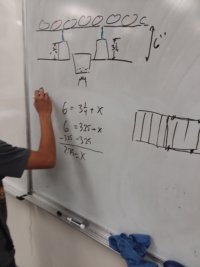 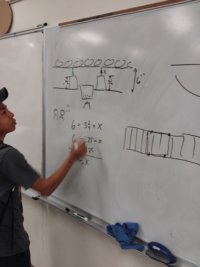 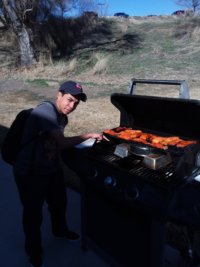